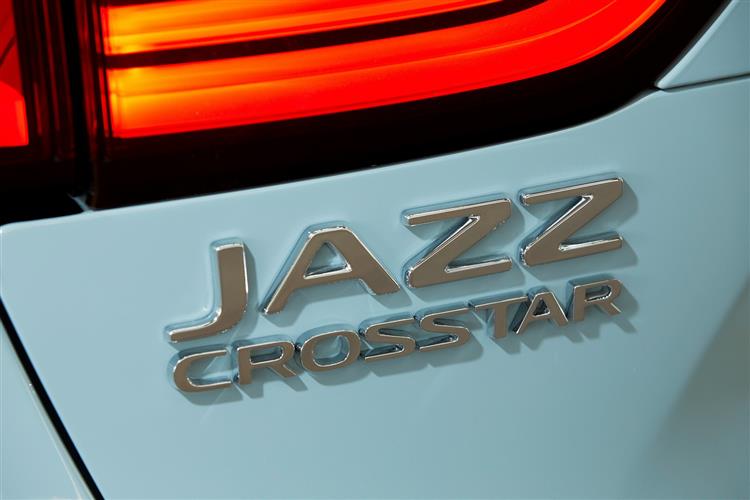 The Jazz Crosstar is intended by Honda to bring more of a lifestyle vibe to the Jazz supermini range and, like the standard model, gets a full hybrid engine. With the Crosstar, there's most of what you'd get with a small SUV - including a bit of extra ride height. But none of the crossover compromises you won't want to make if at heart you're still a supermini buyer.

These days, if you don't have exactly the right kind of SUV-style crossover model for every conceivable market segment, it seems you have to create one. This trend is perhaps most obvious at the smallest end of the crossover market. If your brand doesn't have a really small SUV model in the style of a Nissan Juke or a Volkswagen T-Cross, it's a potential problem. Which is why Ford had to jazz up its Fiesta supermini to create the Fiesta Active. And Audi felt the need to rugged-ise the A1 to create the A1 Citycarver. Honda is in much the same boat. For crossover buyers, it doesn't have anything smaller than the HR-V. Hence the reason why the brand's fourth generation Jazz supermini range includes the SUV-style Crosstar model we going to look at here. Changes over the standard car are fairly minimal, so there's the same full-hybrid engine under the bonnet and the same clever 'Magic seat' system inside. But this Crosstar variant will make much more of a statement on the school run.

Thanks to a 37mm increase in ride height, the Crosstar version of this Jazz should be able to offer increased suspension travel, but any benefit is difficult to sense on the road in comparison with the standard version. There are no mechanical changes over the ordinary car and there's no kind of front wheel grip control system either. Like all current Jazz models, this one comes only with one engine - the brand's e:HEV powertrain. This is a full-Hybrid unit - so it's properly electrified like a Toyota Yaris Hybrid, rather than being only mildly electrified like the MHEV unit you can now have in a Ford Fiesta. The difference is important because a full-Hybrid can have far more reliance on battery power, especially in urban conditions. In this case, it's a 1.5-litre unit putting out 109PS which uses two electric motors and a compact lithium-ion battery pack. The combustion engine sends drive through a clever fixed-gear auto transmission which Honda reckons is smoother and more efficient than the type of belt-driven CVT set-up the Jazz had before (and the one that Toyota uses in its hybrids). Basically the whole set-up is a downsized version of the 2.0-litre electrified engine used in the CR-V Hybrid and as there, you get various drive modes which the car selects for you. Most of the time at the wheel of this Honda you'll be in 'Hybrid Drive', which combines the engine and the battery pack in the most efficient way possible while recovering electricity from deceleration and storing it for future use. 'EV Drive' forces the Jazz to run in electric-only mode (though it can only do that for very short distances). And the 'Engine Drive' setting combines the petrol engine and the electric motor output for maximum performance. In this mode, the e:HEV powertrain gives this Jazz a 0-62mph time of 9.9 seconds and a maximum speed of 107mph.

This Crosstar model is distinguished by a bespoke front and rear bumper, black garnishes around the front fog lights, a black fender, a black finish for the front grille and side sill garnishes. Plus there are silver-coloured door mirrors with integrated LED indicators. And you get roof rails. Along with that slightly higher 37mm ride height increase. And there's the option, unique to this variant, of 2-tone paint which gives you a gloss black roof, all in an attempt to introduce more of a Crossover vibe to this supermini. As with standard Jazz, this car is pretty compact, measuring in at about 4-metres in length. Inside, the only real significant Crosstar change is the addition of water-repellent fabric upholstery. Plus you get a premium audio system. Otherwise it's just as it would be on an ordinary top spec 'EX'-grade Jazz model. There are wide 'body-stabilising' front seats supposed to reduce fatigue on longer journeys and the dash has a minimalist, uncluttered look. Its centre touchscreen has smartphone-style swipe technology and incorporates wireless 'Apple CarPlay'/'Android Auto' smartphone-mirroring. There's also a digital instrument cluster. Perhaps the best news though, is that Honda's clever 'Magic Seat' design remains in the rear, giving owners the option of either folding the rear bench flat or flipping up the seat bases to create a taller load space. Boot capacity is 298-litres with the rear seat in place - or 1,203-litres with it folded.

Prices for this Jazz Crosstar start from just under £23,000 in the single 'EX'-spec available - which represents a premium of around £1,500 over an 'EX-spec Jazz without the Crosstar package. You can pay a little extra for 'Premium' or 'Premium+' paint, but otherwise there aren't too many other options. Black paint will be the default cost-free option while six other paint shades are also available. This Crosstar variant is exclusively available in two-tone combinations with a gloss-black roof. Standard features include adaptive cruise control, lane keep assist and automatic headlights, plus there's 'Apple CarPlay' and 'Android Auto' smartphone-mirroring. Infotainment and connectivity benefit from a sophisticated voice command system, the Honda 'Personal Assistant', first seen on the little Honda e. This is basically a next-generation voice control system in that it can respond to multiple commands: for instance "OK Honda, find me an Indian restaurant with WiFi and free parking". The set-up would then display suitable options on the fascia's central touchscreen before plotting a route to the chosen destination. With this car, Honda is also offering the latest version of its Honda+ smartphone app, which includes remote vehicle locking and unlocking, plus 'intelligent geofencing', which alerts an owner if the vehicle breaches a pre-set 'geofence' zone. Plus there's the ability to send journey information from the app to the car's navigation system.

You'd hope that with all that hybrid technology on board, this Jazz would be a frugal thing and, by and large, it is. The Crosstar model has claimed WLTP-rated combined cycle economy and emissions figures of 58.9mpg and 110g/km (down from 62.8mpg and 102g/km in the standard model). Insurance is group 19A. Many customers will want to budget ahead for scheduled maintenance with fixed-price scheme called 'Five'. It includes five years' worth of maintenance, an extended warranty for this period and roadside assistance breakdown cover should the unexpected happen. This can be transferred to a new owner if you sell the car before the service plan has expired. Residual values are expected to be significantly better than most other supermini segment rivals. And the three year 90,000 mile warranty is better than the package you get from many competitors too. In addition, surface corrosion is covered for three years, exhaust corrosion is covered for five years, chassis corrosion is covered for ten years and structural corrosion for twelve years.