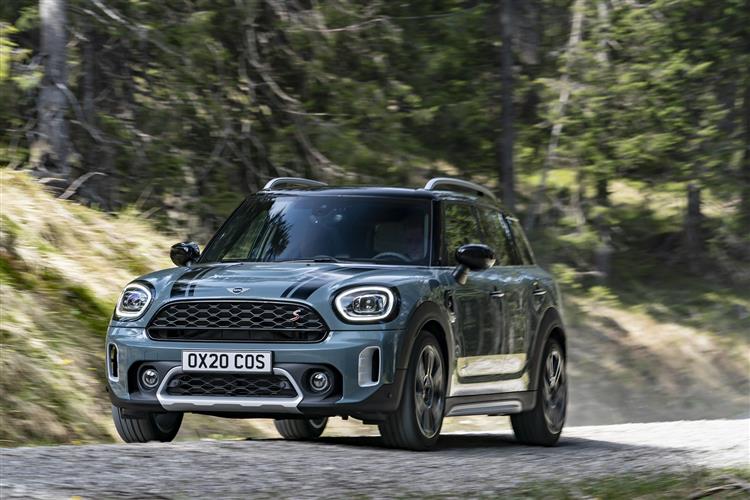 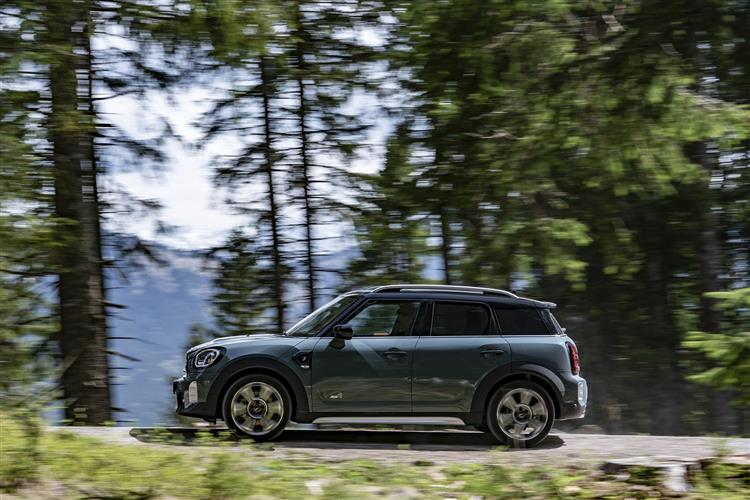 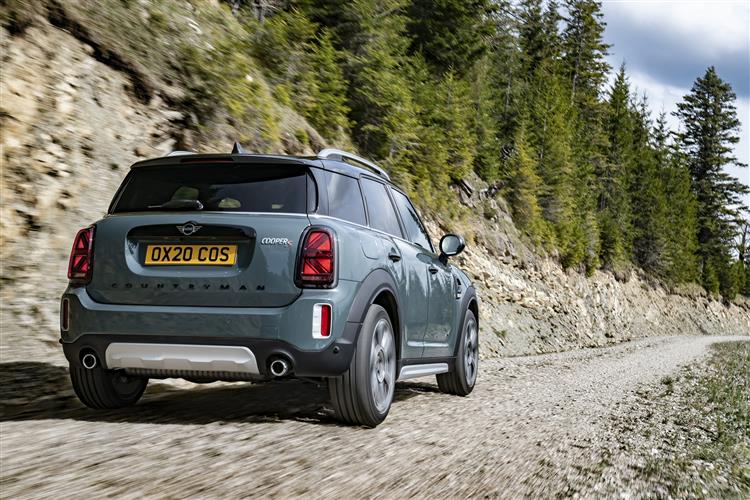 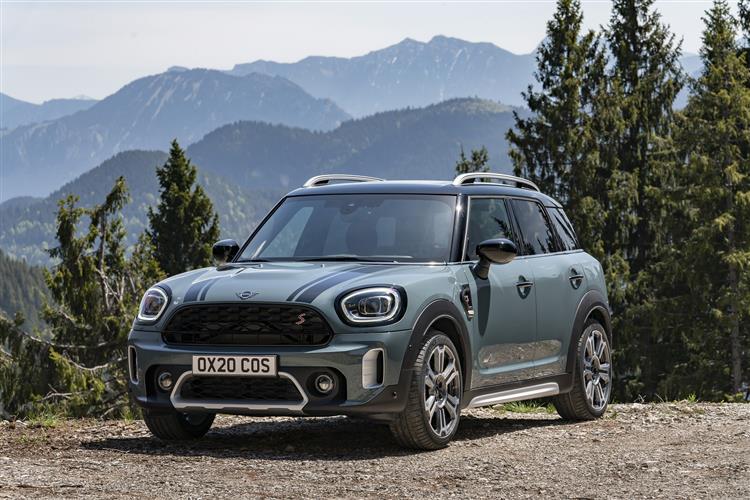 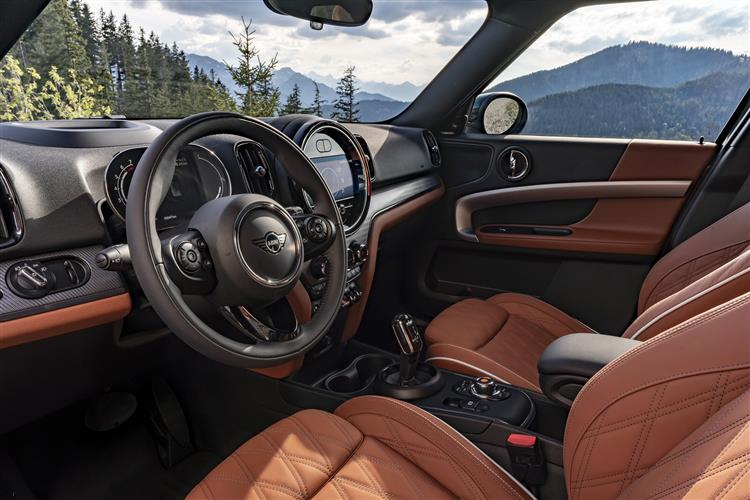 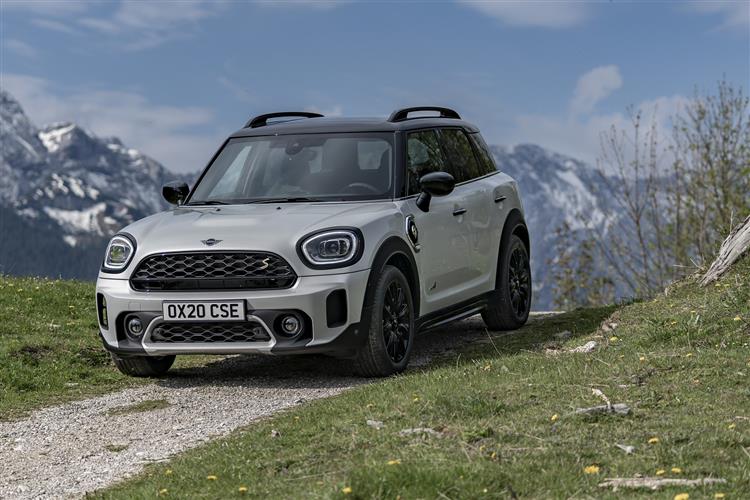 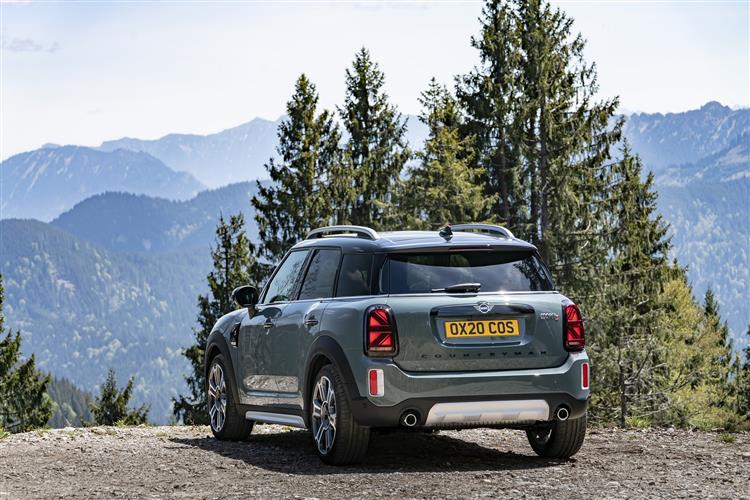 The second generation MINI Countryman is the biggest and most versatile model in the brand's 57-year history. With its large external dimensions and versatile space throughout the cabin and luggage area, it offers a credible premium alternative to Qashqai-sized family Crossover segment rivals. There's a bit of interior innovation - and the option of Plug-in hybrid tech too. Plus in this revised form, it's had a bit of a wash 'n brush-up.

Back in the late Sixties, Sir Alec Issigonis, designer of the original British Mini, was faced with a rather difficult task. His little city runabout was a huge success, driven and loved by everyone from Peter Sellers to the Beatles, but beyond it, there was little for family owners to move on to. What was needed was a five-door, four-metre-long sister model that still kept much of the Mini's cleverness. And the result was the Austin Maxi. Forty years on in 2010, BMW were faced with a similar issue. Their new MINI was a hit but it couldn't offer five proper doors or decent space for rear passengers or luggage. That time round, the issue was solved by the first generation version of the car we look at here, the MINI Countryman. That model did well for MINI, but it was never quite large enough to properly compete with family-sized Crossover models in the Qashqai class. Nor was it quite sophisticated enough to tempt users of premium-badged compact Crossovers, cars like Audi's Q3 and Mercedes' GLA. This larger, cleverer second generation Countryman, launched in 2017, addressed both these issues. Here, that design has been usefully improved.

The MINI Countryman is available with a choice of various engines. The most popular option is the 3 cylinder 1.5-litre 136hp petrol unit in the base 'Cooper' model. There's also still a 'Cooper D' diesel option too, a 2.0-litre engine developing 150hp. The brand also offers a 'Cooper S' performance variant, which uses a 178hp 2.0-litre petrol unit and is able to complete the sprint to 62mph from rest in just 7.5 seconds. All three of these core derivatives can be had with manual or auto transmission and either front or ALL4 four wheel drive. MINI also offers an electrified model, the Countryman Plug-in Hybrid, which features ALL4 4WD and auto transmission and uses the 1.5-litre petrol unit from the Cooper, boosted by an 88hp electric motor powered by a lithium-ion battery. At the top of the range is the John Cooper Works high performance variant, which has ALL4 traction and borrows the 2.0-litre petrol unit from the Cooper S and tunes it out to 306hp, making 62mph achievable in only 5.1s. Given this car's size and price, you'd expect it to be a more grown-up thing than smaller MINI models, safer, more spacious and able to cover longer distances. But, as any teenager will tell you, being grown-up can also mean being boring. So, does driving a Countryman feel like driving a MINI? Well, set off down the road and first impressions are that to some extent it does. The ride is very firm - possibly too firm for some buyers - and you get this remarkably quick steering which immediately gives the car a keener feeling than you'd get in most Crossover rivals.

This second generation Countryman is larger than the original MK1 version (it remains the largest MINI ever made) and the car has been updated here with full-LED headlights, a restyled front grille and LED foglights. The rear apron has been redesigned too and the tail lamps are now LEDs. As far as the changes made inside, the main one lies with the addition of the 5.0-inch digital instrument cluster screen we first saw in the MINI Electric. Most customers opt for one of the Navigation Packs which both give you an 8.8-inch centre-dash colour touchscreen. All around the dash, surfaces are more refined and buttons and switches integrated more harmoniously and top variants get extra piano black interior surfaces. As before, the second row of seating contains three fully-fledged seats, and the rear door openings are surprisingly generous for a MINI product, enabling easy entry and exit. In addition to overall interior width, leg space is pretty generous too and the rear seats can be shifted back and forth by up to 13cm, prioritising either passenger legroom or boot capacity depending on the situation. The folding rear backrest offers a 40:20:40 split and also provides a variable tilt angle so as to also offer either increased seating comfort or additional storage space for the bigger 450-litre boot at the rear.

Prices have risen significantly: it's no longer possible to buy any sort of Countryman for well under £20,000. Still, given that this car is now large enough to compete in a larger section of the Crossover market, you could argue that this is fully justified. The asking figures start at around £25,500 for the least expensive Cooper model and rise to around £35,000 for the plug-in version and around £38,500 for the John Cooper Works model. Throughout the range, there's the option of finding around £1,500 more for Steptronic automatic transmission. There's a choice of 'Classic', 'Sport' or 'Exclusive' trim levels. All variants get a Navigation System, Bluetooth, Cruise Control an Emergency E-call set-up and 'Active Guard' autonomous braking. With this revised model, there's a fresh range of body finishes and interior leather trims, redesigned alloy wheels and a new Piano Black Exterior option. The brand has also extended its range of Original MINI Accessories with a selection that ranges from a rear bicycle rack, a roof box, a moulded luggage compartment mat and all-weather floor mats to individual MINI LED door projectors from the MINI Yours Customised programme and John Cooper Works products designed for extreme driving fun. As before, a particularly unique option is the Picnic Bench - a flexible surface that folds out of the luggage compartment and provides seating for two people. Media provision also gets a boost. The standard audio system now offers streaming via Bluetooth connection and a hands-free telephone system with USB interface. The Radio MINI Visual Boost and the digital instrument display form part of the standard Navigation pack, while the Navigation Plus pack has a range of additional infotainment functions in addition to the route guidance system, as well as wireless charging for compatible mobile phones and a second USB socket.

The Countryman has certainly cleaned up its act when it comes to WLTP-rated stats thanks to its range of Euro6d engines. The 2.0-litre diesel unit returns up to 56.5mpg on the combined cycle and up to 110g/km in front-driven 'Cooper D' guise - or 51.4mpg and up to 121g/km on 'Cooper D ALL4' form. Petrol people get a 1.5-litre motor in the 'Cooper' that returns up to 42.8mpg and up to 120g/km in a front-driven manual model. Or a 2.0-litre unit in the 'Cooper S' that manages 40.9mpg and up to 130g/km in manual front-driven form. The efficiency headline with this MK2 model range is the addition of MINI's first Plug-in hybrid engine, a unit you'll find in the Plug-in Hybrid variant. Here, fuel consumption and CO2 emissions are very low, with up to 156.9mpg and 40g/km claimed respectively. Plus this model can travel up to 25 miles on electric power alone. Via a wallbox, the 7.6kWh battery can be recharged in two and a quarter hours: use a regular household socket and it'll take an hour longer. As you drive, there's an 'eDrive' toggle switch that gives you three operating modes. In 'Auto', the car will run on electric power alone at speeds of up to 50mph or in 'MAX' at up to 78mph. Finally, there's a 'SAVE Battery' option that allows you to 'freeze' your all-electric charge capability so you can activate it later in your trip - say in urban driving you'll reach at the end of a long motorway haul.