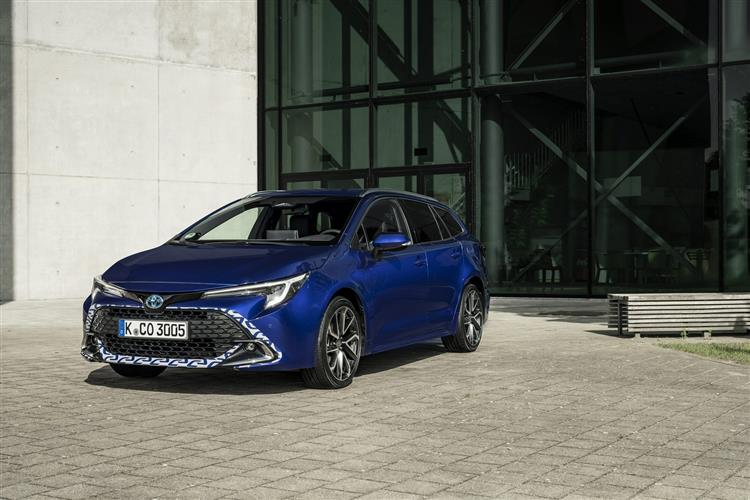 With their Corolla Touring Sports model, Toyota aims to bring us a compact yet very spacious estate that's a cut or two above the class norm. This revised version boasts a sharper look, a smarter interior and a more sophisticated pair of self-charging Hybrid engines. Plus it's still very practical, with a decent 598-litre boot. It's a car that's been rehabilitated.

You might well think of the Toyota Corolla as a rather sensible but broadly uninteresting thing. If so, you're a little behind the curve. These were sentiments reasonably applicable to this car's Auris predecessor but its Corolla replacement has quite a bit more attitude. Here, we're looking at the 'Touring Sports' estate body style. This Corolla Touring Sports model succeeded the old Auris Touring Sports estate, which sold between 2012 and 2018 and tried for a younger, more fashionable audience than its hatch stablemate. People who wanted more from their transport than sense and sensibility. It was a worthy effort, but one slightly hobbled by a rather dull interior and unremarkable driving dynamics. Outside of the expensive top petrol/electric hybrid variant, the engine range was a little behind the curve too. So in 2019, Toyota had another go and continued the Touring Sports theme with its new generation Corolla model. This improved Corolla Touring Sports model is a much more creditable package, offering a sharper look, but the important stuff lies inside and beneath the bonnet in a package that still manages to be one of the more practical choices in its class. Let's check it all out.

This revised Corolla Touring Sports gets the fifth generation of Toyota's full-Hybrid self-charging powerplant and, as before, it's available in both 1.8 and 2.0-litre petrol forms. The big differences come with the smaller capacity 1.8-litre unit, with power output up from 120 to 138bhp, bringing a 1.7s reduction in the 0-62mph sprint time to 9.2s. A lot of that's down to weight-saving (the hybrid system's more powerful lithium-ion battery is 18kgs lighter), plus driveability's been improved too, thanks to a redesign for the power control unit and the transaxle motor. In addition, the hybrid control has been recalibrated to provide acceleration feel closer to throttle pedal use, with less of the previous 'rubber band' effect. As before, it all works via CVT auto gearbox with six speeds. Whichever powerplant you prefer, you should find this Toyota dynamically able - far more so than some of its segment predecessors. Throw the car into a corner and you'll find that though this Corolla is no Focus, it far from disgraces itself, with a decent level of front end grip and steering that's predictable and accurate, though rather light. The 2.0-litre variant's obviously the one to choose if you want a little extra performance, this version (now with power raised from 180 to 193bhp) making rest to 62mph in 7.5s (around a second faster than a VW Golf 2.0 TDI), but more relevant is the huge improvement in response in the 30-50mph overtaking increment that makes the car feel so much more flexible and spontaneously powerful on faster roads. Don't misunderstand us: a 2.0-litre Hybrid Corolla is still way down on the level of pulling power a black pump-fuelled engine would produce, with a 190Nm figure that's almost 50% less than a comparable 2.0-litre diesel. But you notice the shortfall much less than you do with the 1.8-litre Hybrid.

Subtle updates mark out this revised Corolla Touring Sports model. These include changes to the front grille mesh pattern, fog light bezels and alloy wheel designs. Higher grades gain smarter bi-LED headlights with an Adaptive High-beam System. In addition to this estate variant, there's also a completely separate Corolla Cross SUV model, though that's not our focus here. This is one of the better looking compact estates. Some of these look a little awkward, with the kind of finished shape that brings to mind a hatchback being squired by a uPVC conservatory. There's nothing like that here. In profile, the 'Touring Sports' model shares its hatchback stablemate's steeply raked windscreen, which flows into an extended roofline with aluminium roof rails and an integral rear spoiler. This station wagon derivative sits upon a lengthened 2,700mm wheelbase version of this model's 'TNGA' 'Toyota New Global Architecture' platform. Inside, the changes to this updated model are farer-reaching, the key one being a much-needed upgrade to the central infotainment screen, which grows in size to 10.5-inches and gains the facility for over-the-air updates. Plus from mid-range trim levels upwards, the driver's instrument display gains a 12.3-inch combimeter that can be customised to preference across four different modes - 'Casual', 'Smart', 'Sport' and 'Tough'. The driver can also make use of a new on-board voice agent that recognises natural, conversational requests to operate the multimedia, or vehicle functions such as opening or closing windows. The cabin's now of higher quality too, with new graphics, trims and embossed patterns that add three-dimensional depth and tactile appeal to the upholsteries, surfaces and finishes. The trim and seat upholstery combinations follow smarter Dark and Light Harmony themes with co-ordinated colours and finishes to give the interior a contemporary, elegant feel. This model's relatively generous exterior dimensions should be particularly obvious in the rear, though the optional panoramic glass sunroof does eat into headroom. Apparently, it reduces it by 22mm. There's a 598-litre boot in the 1.8 Hybrid variants; in the 2.0 Hybrid, the figure's 581-litres. With the rear bench folded, all derivatives offer 1,591-litres and 1,860mm of load space length. The top SUV-style 'TREK' version has black edging for the front and rear bumpers, silver-finished front and rear under-runs, black wheel arch mouldings and black rocker panels with silver inserts. There's a machined/black contrast design for the 17-inch alloy wheels and TREK badging on the tailgate, plus rear privacy glass, a honeycomb-pattern grille and LED headlights.

There's a £1,270 premium to pay if you want the Touring Sports estate version of this Corolla rather than the standard hatch. That means a price span in the £28,000 to £33,000 bracket - which is par for the course in this segment. There are six trim levels - 'Icon', 'Icon Tech', 'Design', 'GR Sport', 'Excel' and 'TREK'. All of these spec levels deliver even more kit for the latest model year, with fresh colours that include a vibrant 'Juniper Blue'. The dynamic-looking 'GR Sport' version's been upgraded too. This improved Corolla is equipped with Toyota T-Mate, which combines the latest generation Toyota Safety Sense package with other active driving and parking assistance features. Improvements in the operation and functionality of the systems include Acceleration Suppression, which reacts to sudden use of the accelerator when travelling at low speed; collision avoidance support when making a turn at an intersection; Emergency Steering Assist that can now react to oncoming vehicles; lateral collision avoidance and curve speed reduction. There's also now a 'Safe Exit Assist' system, which stops doors being opened in the face on oncoming vehicles, cyclists or pedestrians. And a 'Rear Seat Reminder' has been added, which alerts the driver to look at the rear seats as they leave the car.

Toyota has decided that all Corolla Touring Sports buyers should have a Hybrid engine - and a look at the efficiency stats reveals why. The stats are still pretty eye-catching, a typical 1.8-litre Hybrid Corolla Touring Sports with 'Icon' trim managing up to 62.8mpg on the combined cycle and up to 102g/km of CO2. That's further helped, Toyota expects, by the fact that for typical customers, up to 50% of typical commuting journeys will be accomplished in all-electric drive. For the 2.0-litre Hybrid hatch, the best stats are up to 57.7mpg and up to 107g/km. The Japanese maker describes the Corolla's Hybrid technology as being of the 'self-charging' variety, which means that it isn't of the currently popular Plug-in variety. The brand of course has PHEV technology (it's available on top versions of its Prius model) but currently feels it isn't necessary for the Corolla line-up. What else? Well, the five year 100,000 mile warranty is extremely good and even after that runs out, you'll find that you can extend it for nothing up to a maximum of ten years, providing you have the car regularly serviced at a Toyota dealer. There's also three years warranty against rust and 12 years of anti-corrosion protection.