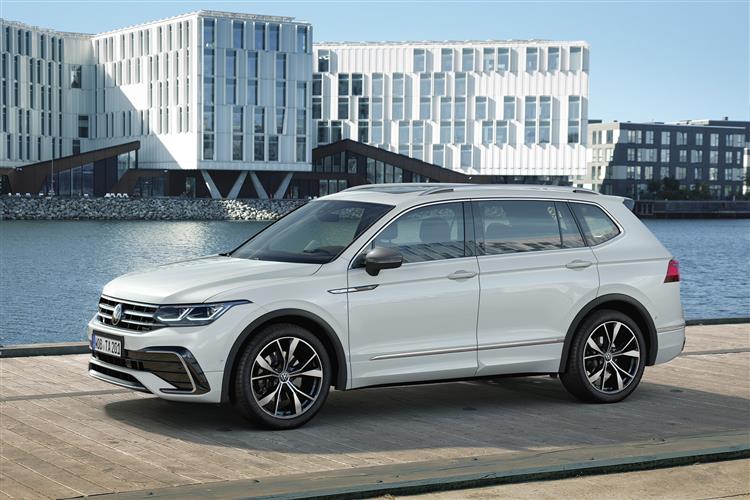 You wouldn't expect the changes made to this slightly lengthened Allspace model to have much effect on drive dynamics - nor have they. If anything, the stretched wheelbase has had a positive effect on this model's roadgoing demeanour, the extra weight and longer stance helping the suspension smooth over bumps through higher speed corners. Ride quality is an established strength of the ordinary Tiguan and remains an attribute here, aided immeasurably by the hi-tech MQB platform that sits beneath the bodywork. There are no changes to the engineering of this Allspace model over the ordinary Tiguan and Volkswagen has also worked hard to ensure that this variant's extra 215mm of body length doesn't upset that car's reassuring handling balance. At the foot of the engine range is a 150PS 1.5-litre TSI EVO unit with 'Cylinder-on-Demand' technology and 2WD. Most buyers of this car though, will probably want the alternative 2.0 TDI diesel, which now gets more efficient twin-dosing selective catalytic reduction system. Many likely customers will want this car fitted with the 2.0 TDI 150PS unit, which can be ordered with with front wheel drive or 4MOTION 4WD - and has a DSG auto option. If you go for the pokier 200PS 2.0 TDI powerplant, you have to have 4MOTION and the DSG auto. The fifth-generation four-wheel-drive 4MOTION system provides a faster apportioning of power to all four wheels via a process that provides pre-activation of the rear clutch and improved operation of the electronic differentials. In recent times, nearly three-quarters of Tiguan buyers in the UK have shown a preference for AWD. In 4x4 form, the car has 200mm of ground clearance, 11mm more than it would have in 2WD guise.

Expect the 2.0 TDI 150PS 2WD manual variant many will want to deliver up to 50.4mpg on the combined cycle and up to 148g/km of CO2. That falls to a best of 41.5mpg and 177g/km for the 4MOTION version of this variant. For the 2.0 TDI 200 4MOTION auto, it's up to 40.4mpg and 184g/km. Go for the 1.5-litre TSI EVO petrol option and the figures are up to 39.2mpg and up to 164g/km with manual transmission. Overall, though the upfront sticker price isn't cheap, whichever variant you choose, you'll probably be better off choosing this Volkswagen than a cheaper South Korean alternative when you factor in depreciation and whole life costs. And warranties? Well the standard package is three years and 60,000 miles. If you plan to see a bit more of the world in your Tiguan, there's a five year / 90,000 mile package. Whatever your decision, your car will come with three years of pan-European Roadside Assistance that has no mileage restriction. The paintwork warranty lasts for three years and, as you'd expect, this car is protected by a 12-year anti-corrosion package.