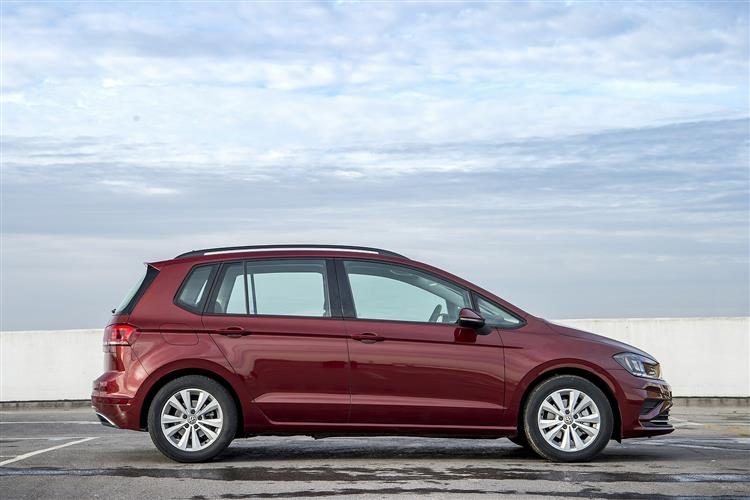 If you've ever got out of a Volkswagen Golf feeling you could do with a bit more space, the answer is right here in the chiselled form of the Golf SV. Here, the Wolfsburg brand has brought us a proper, purpose-built family-sized five-seat MPV that offers key advantages to justify its premium over the standard hatchback model. Specifications on this car have been lately improved and we're testing the 1.5 TSI EVO petrol version.

Every year, around a million people worldwide buy some sort of variant of the Volkswagen Golf. Most choose the hatch or estate versions of course, but a few need something that's Golf-sized with Golf values that's just that bit more versatile - this model, the Golf SV. It was originally launched in 2014, but we're looking here at the much improved version that Volkswagen brought us for the 2018 model year. The 'SV' moniker stands for 'Sports Van', a name used for this car in Europe but one the importers here understandably didn't much like, hence its shortening to a couple of simple letters for our market. It's still not the largest five-seat mid-sized MPV of its kind - but claims to be the classiest. This model was facelifted in 2017 and gained new TSI petrol engines, an expanded range of assistance systems, a new generation of infotainment packages and a smarter look.

This Golf SV gets impressively close to the driving dynamics of the standard Golf hatch model it's based upon, despite the fact that it's 80mm longer and wider, 120mm higher and about 120kg heavier. A standard XDS electronic differential lock torque vectoring system helps get the power down through bends you'd be able to tackle even more confidently if the electric steering set-up offered a bit more feedback. You can improve that by changing the settings on the 'Driving Mode Selection' system that most variants have, this set-up tweaking steering, throttle response and - on auto models - gear change timings to suit your preference. It'll alter suspension feel too if you take up the option Volkswagen offers of 'DCC' 'Dynamic Chassis Control' - though to have that, you have to have picked one of the more powerful engines. There are two of these - the 1.5-litre TSI EVO petrol unit we tried, offered with either 130 or 150PS. And the 2.0 TDI 150PS diesel and there's a choice of 6-speed manual or 7-speed DSG auto transmission. All these powerplants come with the brand's more sophisticated multi-link rear suspension package. Further down the range, you'll be stuck with the cruder torsion beam set-up that gives a slightly more unsettled low speed ride over bumpier surfaces.

As you might expect, this SV model is price-positioned just above hatch and estate Golf derivatives - but not that far above. The premium you'll pay to get this variant's MPV versatility varies with trim and engine choice but in rough terms, think of an SV as costing you £1,500 to £1,700 more than a directly equivalent Golf Hatch and £750 to £1,000 more than a directly equivalent Golf Estate. For reference, an equivalent version of Volkswagen's Touran 7-seat MPV would cost around £2,500 more. Overall, Golf SV pricing sits in the £25,000 to £29,000 bracket with this 1.5-litre TSI Evo petrol engine and there are two trim levels, 'Match Edition' and 'GT Edition'. There's a premium of around £2,500 to move from the 130PS version of this unit with manual transmission to the 150PS version of this powerplant with DSG auto transmission. Even 'Match Edition' spec includes two-zone climate control, LED headlights and a Winter Pack (including heated front seats) - items that previously would have been extras on mainstream versions of this car, collectively setting you back around £2,000 more. The winter pack also adds headlight washers, heated windscreen washer jets and a low washer-fluid warning light which, combined with LED headlights, optimise visibility at all times - especially during winter months when road grime can obscure a driver's view.

The Volkswagen Group's impressive 1.5 TSI EVO unit uses the brand's clever 'ACM' 'Active Cylinder Management' technology to cut out two of its four cylinders under light to medium throttle loads and as a result, the efficiency stats aren't much different to those of the 1.0-litre TSI engine. In its 130PS form, a Golf SV 1.5 TSI EVO manages 49.6mpg on the WLTP combined cycle and 116g/km of NEDC-rated CO2. There's no downside if you opt for auto transmission. For reference, the auto-only 150PS version of the 1.5-litre engine records 43.5mpg and 120g/km. And warranties? Well the standard package is three years and 60,000 miles. We can't see why Volkswagen couldn't extend that mileage limit to 100,000 miles, since this is what's on offer with its mechanically very similar Caddy model. Doing that though, wouldn't give Volkswagen dealers so much of an opportunity to sell extended warranty packages. There's one for four years and 75,000 miles or, if you plan to see a bit more of the world in your Golf SV, there's a five year / 90,000 mile package. Whatever your decision, your car will come with three years of pan-European Roadside Assistance that has no mileage restriction. The paintwork warranty lasts for three years and, as you'd expect, this model is protected by a 12-year anti-corrosion package.