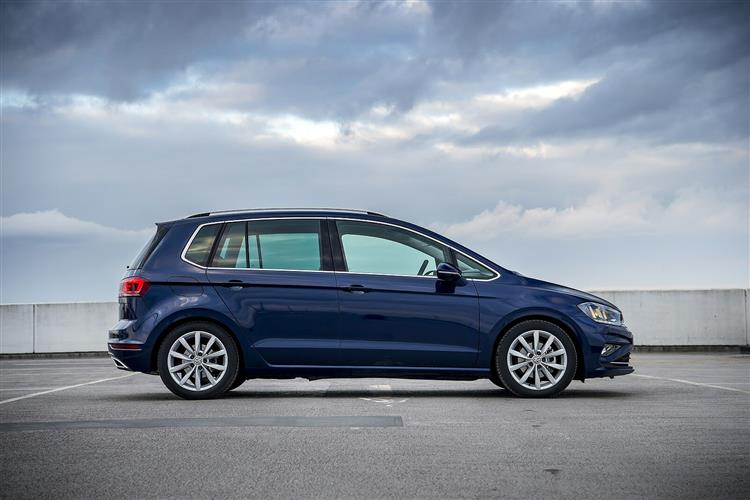 Sometimes more is just better and if you've ever got out of a Volkswagen Golf feeling you could do with a bit more space, the answer is right here in the chiselled form of the Golf SV. It's not the most committed of five-seat SUVs but there is more space in the back. Plus there's more equipment on offer in this improved model.

Volkswagen doesn't often take aim, loose off a shot and see it sail past the target, but that's not far off what it did with the old Golf Plus small MPV, sold in the UK between 2005 and 2013. The basic premise was sound. Take the super-successful Golf hatch and just add a bit more space. The execution, however, was some way off the mark. Volkswagen quickly realised that making the wheelbase longer was cost prohibitive, so the company was stuck with exactly the same amount of seats with the same amount of rear legroom. The only thing the company could really do was go up, the Plus measuring 95mm taller, but the Golf hatch already catered very well to taller drivers. In the end, the promise of more headroom and a sliding rear bench wasn't enough to compensate drivers for an uglier car with a higher centre of gravity and a bigger frontal area. Volkswagen sold just over 42,000 in an eight year spell, which is about seven months worth of Golf hatch sales in a decent year. Not to be defeated, Volkswagen returned to the compact 5-seat MPV market in late 2013 with the Golf SV and as soon as we tried the car, we realised that lessons had been learned from the 'Plus' debacle. The SV (marketed as the 'Sportsvan' in Europe) proved to be longer and a good deal prettier than its predecessor. This model was facelifted in 2017 and gained new TSI petrol engines, an expanded range of assistance systems, a new generation of infotainment packages and a smarter look.

The talents of the Golf Mk 7 chassis need no reiterating and the lengthening process hasn't done too much to dull the driving experience. You still get the same polished feel to the suspension and that crisp, no-nonsense steering. Model for model there's around a 120kg weight penalty over the hatch, so the SV is never quite as brisk off the line but there's not a whole lot in it. Think a Golf minus 1 or 2 per cent at the limit and you're still a long way better than most of its rivals. Engine-wise, if you want petrol power, you'll get a choice of a pair of turbocharged 1.5 TSI units offering either 130 or 150PS. Go diesel instead and there's a 115PS 1.6TDI with 5-speed manual transmission or a 150PS 2.0-litre TDI flagship variant with a 7-speed DSG auto gearbox. The 2.0-litre diesel will punt the big-boned Golf SV to 62mph in 9.2 seconds and on to a top speed of 110mph, making it a more than adequate long distance cruiser.

SV pricing starts from just over £25,000. Volkswagen charges just under £2,000 more for this MPV variant than you'll pay for an equivalent version of the standard Golf hatch, model for model, and offers the SV in various value-orientated trim levels. Even the base 'Match Edition'-spec version isn't badly appointed, coming complete with two-zone climate control, LED headlights and Winter Pack (including heated front seats) - optional extras worth £1,910 when equipped individually. These options enhance the comfort and visible qualities of the two Golf SV specs (the other is 'GT Edition'), with the added luxury of the two-zone climate control over manual air conditioning, while the heated front seats included in the winter pack provide further comfort. The winter pack also adds headlight washers, heated windscreen washer jets and a low washer-fluid warning light which, combined with LED headlights, optimise visibility at all times - especially during winter months when road grime can obscure a driver's view.