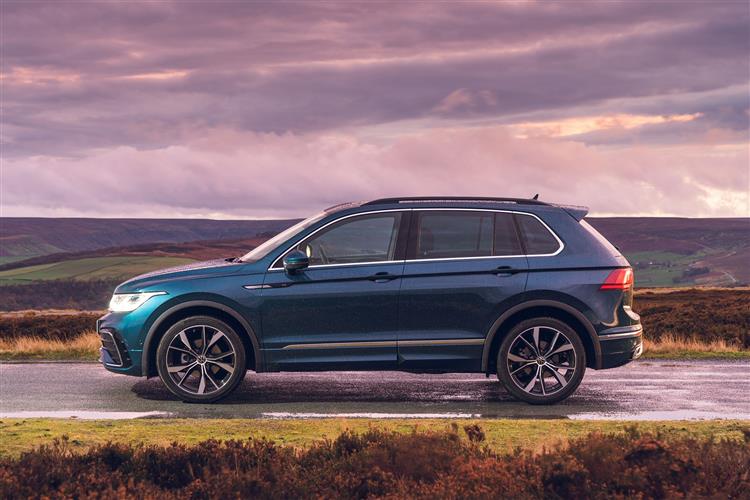 Let's look at the WLTP-rated figures. The latest 1.5 TSI 130PS petrol unit achieves a WLTP-certified figure of up to 44.8mpg on the combined cycle, while emitting up to 143g/km CO2. For the 1.5 TSI 150PS variant, the figures are up to 42.8mpg and 151g/km. The 2.0 TSI 190PS engine can deliver up to 34.0mpg on the combined cycle and up to 189g/km of CO2. Go for a 2.0 TDI diesel 150PS DSG model with 4MOTION 4WD and you can expect up to 42.8mpg and a CO2 reading of 173g/km, which is pretty creditable. The eHybrid PHEV model offers a credible alternative to diesels and boasts a 30 mile electric only WLTP driving range. In other words, if the vehicle is only used for short commutes and re-charged regularly overnight, it is conceivable that this Tiguan eHybrid could be run almost entirely without fuel. And conceivably (if you get your charging regime right) on off-peak electricity that'll hopefully cost pennies rather than pounds to consume. Expect your BiK tax exposure with a Tiguan eHybrid to be low (as low as 11%), based on a combined cycle fuel economy figure of up to 176.6mpg and emissions of up to 38g/km. Powering this Volkswagen PHEV up from a domestic socket would take around five hours, but most owners will want to find an extra few hundred pounds to install a Wallbox charger in their garages. Use such a wallbox - or indeed plug in to one of the many public charging points springing up around the country - and you'll be able to reduce your charging time period from empty to around three hours and thirty minutes.