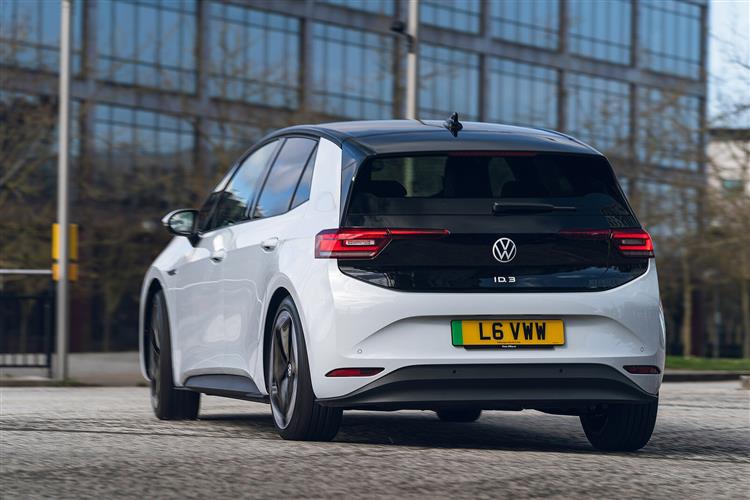 Let's cover what you need to know here: there are three choices of powertrain for the ID.3, with battery packs rated at 45, 58 and 77kWh, allowing for respective WLTP-rated driving range figures of up to 217, up to 260 and up to 342 miles. Plus there are two electric motor options, rated at around 150PS and 204PS, both of which drive the rear wheels through a single-speed auto gearbox. It's the mid-level 58kWh battery package with the 204PS electric motor that is likely to prove most popular. Even if budget limits you to the base 45kWh variant with its 150PS motor, it'll still feel quite rapid, with 62mph from just just 8.9s away. All ID.3 models have the same limited 99mph top speed. To fire everything up, you hit the starter button, then activate the gear selector, a rocker switch mounted on the steering column that twists in two directions: it's forward for 'drive' and the braking regeneration modes, And you twist back for neutral and reverse. Acceleration has been programmed to be linear and consistent rather than arriving all-in-a-rush, though the top 77kWh version can get to 62mph in 7.5s. Top speed across the range is limited to around 100mph. And weight has been kept to reasonable levels (1,670kgs is relatively light for an EV) which should help handling. As is now compulsory for Evs, there's a pedestrian warning buzzer which works at under 12mph to warn pavement folk of your approach. The super-tight 10.2-metre turning circle is closer to that of an up! city car than a Golf.

Volkswagen's goal with the ID.3 was to make the switch to full-EV motoring more affordable for more people - which means making it cost the same (or less) than an equivalent combustion-engined model. They have quite managed that yet, but the range is still expanding. We'll quote you prices following deduction of the £2,500 government Plug-in grant, available on all models below £35,000, which is most of the range. Things kick off with a base 'Pure Performance' models featuring the smallest 45kWh battery mated to a 150PS electric motor, derivatives which cost from just over £27,000, with two trim options - 'Life' and 'Style'. Most ID.3 customers start their search with the 58kWh battery variants, which cost from around £28,500 and use the 145PS 'Pro' electric motor - there's a choice of 'Life Pro' and 'Family Pro' models, both also available in 'Performance' form with the gutsier 204PS electric motor for £1,300 more. That gutsier motor has to be had with the first of the plush variants priced over the goverment's £35,000 grant threshold, the 'Max Pro Performance' 58kWh model, which costs nearly £8,000. For around £39,000, there's also a top 'Tour Pro S' variant which mates a larger capacity 77kWh battery with the 204PS 'Performance' motor. A 10-inch centre-dash infotainment screen is standard across the range and features a neat 'touch-sensitive bar', using which you can swipe across various screen zones to control both stereo volume and cabin temperature. Volkswagen's latest natural voice control system also features, enabling you to ask the car virtually anything as long as you preface it by "Hello Volkswagen". We'd want to specify the clever head-up display system, which projects augmented-reality navigation arrows, hazard alerts and pedestrian detection messages onto the inside of the windscreen in front of you as you drive.