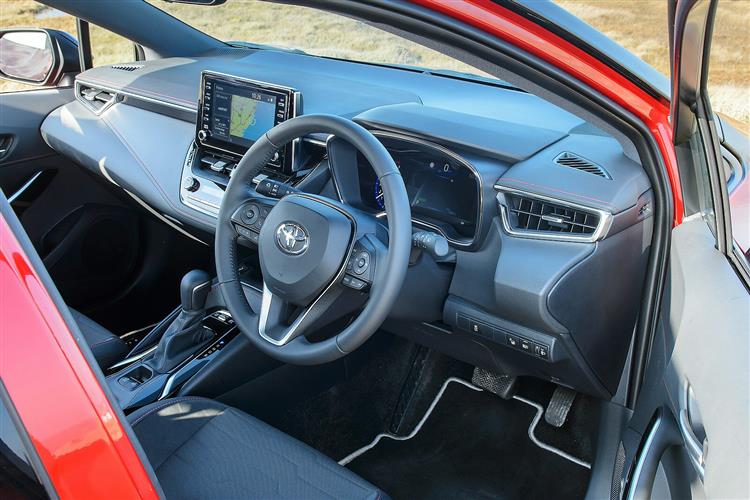 Toyota has returned the Corolla name to the family hatchback segment with a more class-competitive hybrid-focused model line-up of hatches, saloons and estates. If you'd previously dismissed the Japanese brand as an also-ran in the Focus class, it might be time to think again.

Why would you change the name of the world's best selling automotive model line? The reasons are difficult to understand, yet that's exactly what Toyota did back in 2007, changing the badging from its volume family hatchback model from 'Corolla' to 'Auris'. Now though, the 'Corolla' name in back. Indeed for Toyota, it's like it's never been away. The brand describes this as the '12th generation' model. Away from naming semantics, there's much of interest here, not least the fact that both the engines offered are petrol/electric hybrids. There are three body styles this time round too, a saloon variant joining the usual five-door hatch and 'Touring Sports' estate. All are built on the 'TNGA' 'Toyota New Global Architecture' platform and constructed at the brand's British factory in Burnaston, Derbyshire.

This Corolla was the first of the brand's models in Europe to offer customers a choice of two hybrid powertrains - a revised 120bhp 1.8-litre system and a fresh 178bhp 2.0-litre unit that's engineered for more power on demand and more effortless acceleration, without compromising overall fuel and emissions efficiency. As full hybrids, both powertrains have the advantage of offering an all-electric drive capability, with zero emissions and fuel consumption. Both, as you would expect, are also matched to a seamless belt-driven CVT automatic transmission with six speeds. There are wheel-mounted paddleshifters supplied as part of this transmission package, but it's unlikely that typical buyers will make much use of them. For the record though, the 2.0-litre hybrid variant should get from rest to 62mph in around 8 seconds, which is reasonably rapid by class standards. Expect refinement to be excellent; certainly far better than it would be in a rival rumbly diesel. Toyota initially offered this car a with a conventional 1.2T direct injection turbocharged engine, but that option's been discontinued. So it's hybrid power (with auto transmission) or nothing, even if you go for the line-up's most dynamic variant, the 'GR Sport' derivative, which features a look and feel apparently developed with the influence of Toyota's motorsport division, Gazoo Racing.

It's not only the styling that's more purposeful than that of the old Auris model. Toyota has made much more of an effort with interior space too, helped by the extra flexibility of this 12th generation Corolla model's new 'TNGA' 'Toyota New Global Architecture' platform. In hatch form, it's 40mm longer, 30mm wider and 25mm lower than the old Auris. That makes it only slightly shorter than a Ford Focus and quite a bit longer than a Golf. Inside, the cabin should feel considerably more up-market than the interior of an Auris ever was, with better-quality materials used and an 8-inch 'Toyota Touch 2' centre-dash infotainment screen as standard, complete with a DAB tuner and a reversing camera. On most variants, it will feature navigation too. The extra space freed up by the more generous exterior dimensions should be particularly obvious in the rear, though the optional panoramic glass sunroof does eat into headroom. There's reasonable space for a couple of rear seat folk though. Boot capacity is rated at 361-litres for the 1.8 and 313-litres for the 2.0-litre hybrid. Family folk are probably going to be directed towards the 'Touring Sports' estate body style, also available in SUV-style 'TREK' form. The 'Touring Sports' station wagon derivative, like the alternative Saloon body style, sits upon a lengthened 2,700mm wheelbase version of the TNGA platform.

Toyota isn't bothering here to try and provide an affordable entry-level model, prices across the all-hybrid range starting from around £24,000. There's a premium of around £1,200 to go from the five-door hatch body shape to the 'Touring Sports' estate. There are five main trim levels - 'Icon', 'Icon Tech', 'Design', 'Excel' and 'GR Sport', plus the Touring Sports estate also gets an extra SUV-inspired 'TREK' variant. All of these spec levels deliver plenty of kit. Even 'Icon' variants deliver 16-inch alloy wheels, heated front seats with lumbar support, automatic LED headlights and dual-zone air conditioning. There's also an 8-inch centre-dash 'Toyota Touch 2' touchscreen, your access point to a DAB tuner and a reversing camera. As the name suggests, the 'Icon Tech' grade adds further useful technology features, including satellite navigation and voice control, plus parking sensors and Intelligent Park Assist' set-up that will steer you into spaces. The top 'GR Sport variant gets special 17 or 18-inch wheels, plus sports front seats upholstered in fabric with a dedicated pinstripe pattern and with seatback and cushion bolsters finished in black and grey synthetic leather. All Corollas get as standard the full package of 'Toyota Safety Sense' camera-driven safety features. These include autonomous braking, adaptive cruise control, Lane Trace Assist, Road Sign Assist and Automatic High beam.

Toyota thinks that all Corolla buyers are going to want a Hybrid engine - and a look at the efficiency stats reveals why. Even on the more stringent WLTP cycle, the stats are still pretty eye-catching, a typical 1.8-litre Hybrid Corolla Hatch with 'Icon' trim managing up to 62.8mpg on the combined cycle and up to 101g/km of CO2. That's further helped, Toyota expects, by the fact that for typical customers, up to 50% of typical commuting journeys will be accomplished in all-electric drive. For the 2.0-litre Hybrid hatch, the best stats are up to 57.7mpg and up to 111g/km. The Japanese maker describes the Corolla's Hybrid technology as being of the 'self-charging' variety, which means that it isn't of the currently popular Plug-in variety. The brand of course has this technology (it's available on top versions of its Prius model) but currently feels it isn't necessary for the Corolla line-up. What else? Well, the five year 100,000 mile warranty is extremely good and even after that runs out, you'll find that most spares are relatively inexpensive. There's also three years warranty against rust and 12 years of anti-corrosion protection.