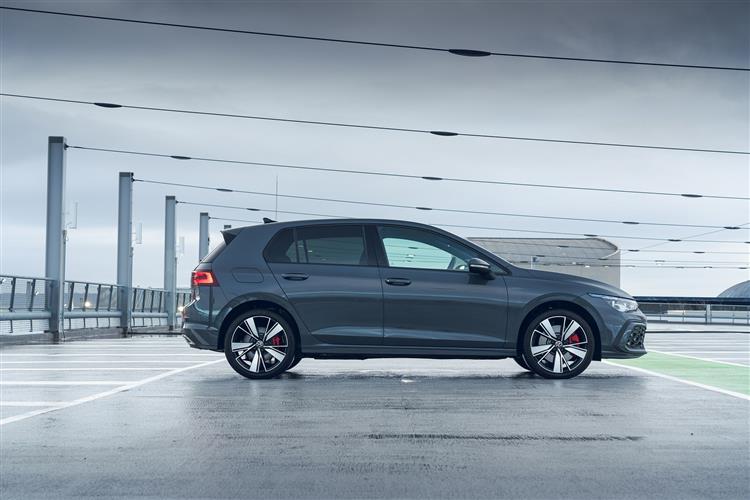 Volkswagen's second generation Golf GTE continues to offer a more dynamic, if rather pricey, take on plug-in hybrid technology, combining sporty styling and pokey petrol power along with real world battery range and frugality. The idea is to deliver GTI responsiveness along with ID.3-style EV sustainability. If Volkswagen has done just that, then this could very well be the ultimate all-round family hatch.

Hybrid cars used to be dull, compromised, soul-less things. In buying one, you sacrificed driving enjoyment for eco-minded technology and positioned yourself amongst smug, green-minded folk. It isn't like that any more - or at least it doesn't need to be, according at least to this car, Volkswagen's Golf GTE. This second generation model, launched early in 2020, succeeds an original Golf GTE that was one of the market's very first plug-in hybrids when it was first announced back in late-2014. This replacement's key change is a lithium-ion battery twice as large, which usefully extends the WLTP-rated all-electric driving range to 40 miles. Plus energy deployment can now be predictive, taking into account GPS data. And of course there are all the advantages of the latest MK8 Golf model line. If you're the sort of buyer who might have previously been steered towards the economy of a Golf GTD diesel but secretly hankered after the smoothness of the GTI, this GTE could be the perfect solution.

As with its first generation predecessor, the combustion element of this Golf GTE model's drivetrain uses a 150PS 1.4-litre TSI petrol engine and a 6-speed DSG auto gearbox. What's changed this time round is that the 85 kW electric motor this package works with is mated to a lithium-ion battery that's 50% bigger, now rated up at 13kWh, quite a large capacity for a plug-in hybrid model. That's why the all-electric driving range has increased to 40 miles. And why the all-electric top speed has improved to 80mph. When the battery is sufficiently charged, the GTE always starts in its all-electric E-MODE, switching to the alternative 'Hybrid' mode only if the energy capacity of the battery drops below a certain level or the vehicle's speed rises above 80mph. As before, the driver has the option to 'save' battery charge for urban driving later in any trip. But what's different this time round is the way that once you've entered in a navigation destination, the battery manager (using so-called 'Predictive Hybrid Control') can predictively take into account road and topographical GPS data to ensure the most efficient use of the available driving range. A new driving dynamics control system known as the 'Vehicle Dynamics manager' also debuts with this MK2 model. This controls the XDS torque vectoring system and the optional DCC adaptive chassis control adjustable dampers to achieve a greater perceived difference between the feel of the car in its comfort and more sportily-orientated drive settings.

As before, a big part of the GTE's appeal is that it doesn't look that different to a GTI. Blue-themed touches differentiate this plug-in variant - on a narrow line spanning the front end of the bonnet and on an LED strip in the headlight. A nice touch is the way that the radiator grille can be illuminated as a continuation of this strip. The large, one-piece lower air intake grille features a honeycomb pattern with a black frame and a striking wing-like design at each corner. In profile, you get 17-inch alloy wheels. And there are wider black side skirt sills than you'd normally get on a Golf, those sills coming together at either end of the car to form the front spoiler and the rear diffuser. LED tail light clusters feature at the rear, where there are no visible exhaust pipes. Inside, as on the outside, the Golf GTE features blue highlights where the GTI has red. This includes the interior of the central spoke of the steering wheel and the seams and edging of the upholstery and trim. Volkswagen's so-called 'Innovision Cockpit' comes as standard, a fusion of the brand's 10.25-inch 'Digital Cockpit' instrument binnacle screen and the company's 10-inch 'Discover Pro' centre-dash navigation infotainment display. Also standard is a background lighting system which bathes the cabin in a spectrum of 30 configurable colours. Otherwise, things are much as with any other Golf, so you get great build quality and decent space for two adults on the rear bench. But boot space falls from the 380-litre total you get with an ordinary Golf to 272-litres because of the positioning of the PHEV system's bateries under the cargo area floor.

It seems a long time ago now that you could buy a Golf GTE for around £25,000 (after the once-available government grant had been taken into consideration). There's no government assistance for plug-in hybrids these days of course and Volkswagen pricing has risen considerably, all of which contributes to an eventual asking price for this car of around £36,000. If you can't stretch to that, there's an alternative Golf eHybrid model with a 204PS version of this same PHEV powerplant, priced at around £33,000. Standard-fit is Volkswagen's clever 'Travel Assist' 'IQ.DRIVE' system that gives Golf GTE drivers active steering, accelerating and braking at speeds of up to 130mph A key GTE model option is the DCC adaptive chassis control adjustable damping system. With the previous generation version of this car, we were a little dubious about whether DCC was worth the extra cash, but this time round, thanks to this MK2 model's integrated 'Vehicle Dynamics Manager' system, you really should be able to feel distinct differences between the available 'Comfort', 'Eco' and 'Sport' modes, plus in the extra 'Individual' menu, there's now a digital slider that allows you to create a more bespoke set-up.

The published figures for the GTE look faintly unfeasible. Volkswagen claims a combined fuel economy figure of up to 235.4mpg and emissions of up to 26g/km. For reference, the alternative Golf eHybrid 204PS version of this model manages 235.4mpg and 21g/km of CO2. Readings like these really point to the deficiencies of the WLTP economy tests for measuring cars like this, rather than the real world abilities of the GTE. In pure electric mode (activated at the press of a button), the Golf GTE can travel up to 40 miles (it's 44 miles for the eHybrid variant). In other words, if the vehicle is only used for short commutes and re-charged regularly overnight, it is conceivable that this GTE can be run almost entirely without fuel. And conceivably (if you get your charging regime right) on off-peak electricity that'll hopefully cost pennies rather than pounds to consume. The combined range of the petrol and electric motor is around 660 miles, making it an ideal comfortable car for longer journeys. The extent to which you can charge this car up from the mains is also obviously going to make quite a difference to your overall running costs. Doing so inevitably takes a lot less time than it would in a comparable full-electric car - say something like a Nissan Leaf. That's because the batteries of a Plug-in hybrid car like this one are much smaller. Powering this Volkswagen up from a domestic socket would take around five hours, but most owners will want to find an extra few hundred pounds to install a Wallbox charger in their garages. Use such a wallbox - or indeed plug in to one of the many public charging points springing up around the country - and you'll be able to reduce your charging time period from empty to around three hours and thirty minutes.