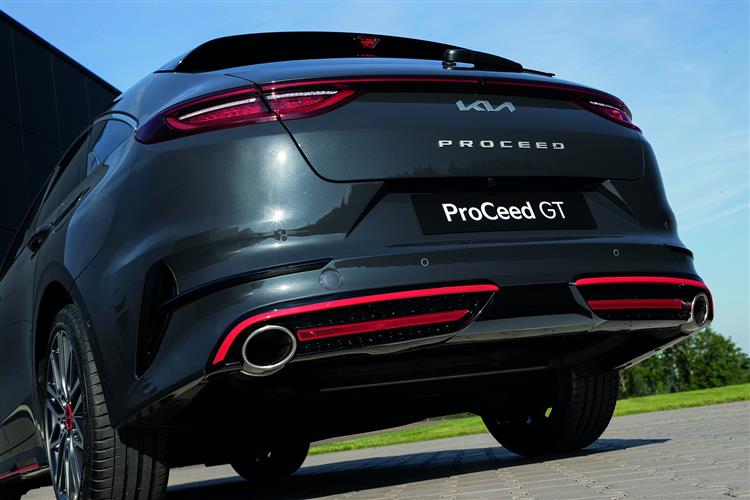 Once a small coupe, Kia's Proceed is these days a small estate - but a very stylish one. The brand supplements its Ceed SW station wagon with this swoopier Proceed 'shooting brake' model to create a 'Fastback' look with that 'want one' factor. The brand promises that the drive dynamics will match the aesthetic promise too. Let's check out the revised version.

If you're going to sell on style, you have to make an effort and, sure enough, the Proceed shares only the front wings and bonnet with other Ceed body styles. The roof line is 43mm lower than on an ordinary Ceed SW estate and 5mm longer, plus the windscreen is 1.5-degrees more steeply-raked and the rear window is slanted 65-degrees off the vertical. This improved model gains visual changes at the front end, including grille changes and a revised headlamp design, all in line with the improvements made to the rest of the Ceed range, but it still features more aggressive front bumper styling than you'd see on any ordinary Ceed. And what the designers call a 'coast to coast' look for the rear that unites the LED tail lamps with the double exhaust pipes. There are 17-inch wheels with 'GT-Line' trim - or 18-inchers with the GT model. Inside, it actually feels quite special, especially in a top 'GT' model, which features leather and Alcantara sports seats with red-stitching and GT badging. There's a sporty flat-bottomed steering wheel and black roof lining. In this revised model, a large 12.3-inch instrument cluster screen is paired with a 10.25-inch screen to further enhance driver interaction with the vehicle. Unfortunately, as before, rear vision out of the sloping rear window isn't great. Rear legroom is much as you'd find it on a more ordinary Ceed model. Headroom though, as you might expect from a 'Fastback coupe', is slightly more limited. There's a 594-litre boot, which is just 31-litres less than you'd get in the ordinary Ceed SW estate.