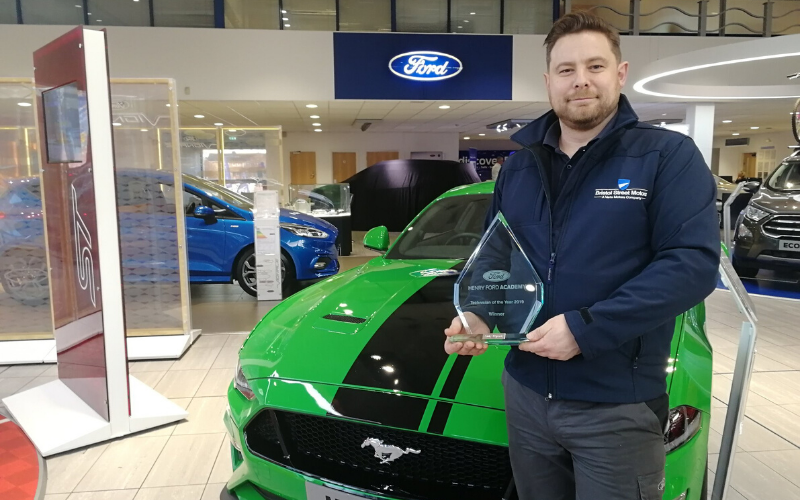 A technician at Bristol Street Motors Ford Birmingham has been named as the prestigious Ford Technician of the Year.

Andy O’Grady, 40, who has worked at the dealership for 17 years, previously worked for Hamer Ford which closed its doors in 2002 before joining Ford Birmingham, based on Bristol Street.

In 2017, Andy placed second in the Ford Technician of the Year awards and vowed to work to the best of his ability to secure the first-place prize which he did in the 2019 award.

To be eligible for the Ford Technician of the Year award, applicants must hold Ford qualified, senior or master technician status and be up to date with training.

The final took place at the Henry Ford Academy where the six finalists completed a series of assessments, which once marked, resulted in 1st 2nd and 3rd place winners.

Commenting on his win, Andy said: “I feel very proud to have achieved this award, particularly with coming second previously.

“It’s great to be recognised for the hard work that I put in on a daily basis and I’m very grateful to have been nominated.”

Martin Leach, general manager of Bristol Street Motors Ford Birmingham, said: “Andy is a perfectionist and his attention to detail in his day to day work is a credit and example to the workshop.

“I have no doubt that this will inspire others to try and achieve what Andy has and I know Andy is looking forward to defending his title next year!”