The all-new British built Honda Civic Type R will make its debut at the Geneva Motor Show next month, and it's set to be the fastest hot hatch available.
Vertu Motors

The all-new British built Honda Civic Type R will make its debut at the Geneva Motor Show next month, and it's set to be the fastest hot hatch available.

The Civic Type R will feature a range of design enhancements that have been heavily influenced by extensive aerodynamic development, ensuring high-speed stability and downforce.

The new Type R is powered by a 2.0-litre direct injection VTEC turbocharged engine, which is said to produce an estimated 300bhp and a confirmed top speed of 167mph, unrivalled amongst its front wheel-drive competitors.

A new, almost completely flat, underside aids airflow under the vehicle and combines with a rear diffuser to optimise downforce. Meanwhile, a bespoke rear wing delivers additional downforce, thanks to the structure of its airfoil section. A wide front splitter and deep side skirts also manage airflow and reduce lift, while the front bumper has been shaped specifically to inhibit air turbulence around the front wheels, cutting drag and enhancing high-speed stability.

New 19-inch alloy wheels, unique to the Type R, fill the wheel arches and accommodate the larger Brembo brakes, which have been developed specifically for the car.

Head of car at Honda UK Leon Brannan said: "We've already seen huge customer interest for this much anticipated and unique car with over 100 orders already in the bank. With the release of these new technical details I think we can expect many more."

The Civic Type R will be unveiled at the 85th Geneva Motor Show on March 3 to 15. 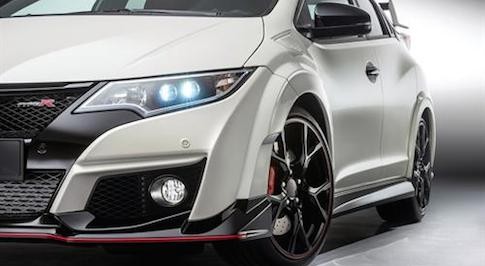